Eyes to See and Ears to Hear

“I will watch to SEE what He will SAY to me” is from Habakkuk 2.

So many times, in the Bible, God asks a prophet, ” What do you see?”

When there is a release of the prophetic in others it stirs what God has released in us. This happened recently when I read a prophetic word on Elijah List from Chuck Pierce a portion of which I post here:

I am opening the portals over you and pouring down, and what leaked out in the past season will now rise up within you and cause you to become buoyant in faith.
“Come with Me now and I will fix the leaks that have allowed My spring to run out of you. You will not just have springs, but you will enter a river. Come with Me now, for I am pouring the river through the portal.” 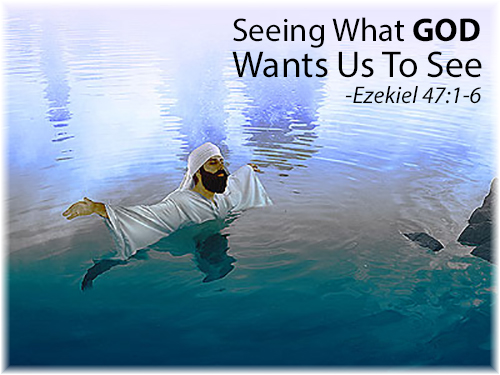 The Lord had given me a vision of this river coming from the throne room just like in Ezekiel 47. Soon we will have rivers enough in which to swim.

Somewhat like this beautiful depiction the water was iridescent, so alive with shimmer almost see-through; it was there and yet not. This is what spiritual eyesight is like; it is difficult to put into words. Yet one of the main ways the Lord speaks is through pictures. Like Moses’ bush, burning but not consumed, this river was there but not. I was looking at it with open eyes, but I was seeing in the Spirit. Both teem with life that cannot be quenched or killed, is eternal, and is poured out from a realm that we only see by God’s grace.

Habakkuk positioned himself on the rampart to watch what the Lord was saying.

Ezekiel saw visions while he sat by the river of Chebar, a river in Babylon, a picture of intercession, standing with the Israelites in their captivity.

Like Habakkuk, like Ezekiel, I will wait, I will watch, I will kneel by the river. Will you?