The power of the blood

I mentioned in the previous post on the Buffet of the Lord that I would next discuss in my next post the power of the blood to relieve us from the influence of the demonic.

In verse 28 the Passion translation refers to the base things of this word as “laughable” in the worlds’ eyes. Let me give just such an illustration from real life. Many years ago, in the late 1980s I was just beginning to learn to walk in the power of the Holy Spirit. I was a member of a very traditional Baptist church.  Some had attended a John Wimber conference and we began to be visited with the Presence of God in ways that were new to us.

On just such a Sunday, I was overcome by the Holy Spirit during worship. I was given a vision of myself covered in the blood of Jesus.  I was completely unaware of any physical manifestation of what was happening but I was shaking violently. I heard demons screaming as they were expelled. Demons that had influenced me for years were trying to hang on to me but the voice of the Lord said this:  The blood of Jesus is slippery and every place where the blood is, the demons that have bothered you no longer have a hold neither will they ever be able to grab on wherever my blood is. No one was praying for me. It was a sovereign act during worship.

The majority of the congregation did not believe in the gifts and ministry of the Holy Spirit never mind the existence of demons or the ministry of deliverance. Did that bother God? HA! Lets look back at the 1 Corinthians 1 reference. That phrase the foolish things of the world is from a root word ‘moros’ which can be translated blockhead, stupid, foolish, an act or appointment of God deemed foolish by men. Indeed a few verses up Paul tells us that the cross is foolishness to men.

Can you imagine then, back in that Baptist church when the pastor called upon me to stand up and tell the congregation what was happening with me when I had created such a scene with my absurd and violent shaking? And my response? Why, Jesus told me that the blood of Jesus was slippery! That demons can no longer get a grip on me! How is that for theological reasoning for the complainants that demons do not exist and if they did, they cannot bother Christians? Oh my! It says earlier in that same chapter, God takes great delight in baffling  the wisdom of the world by using the simplicity of preaching the story of the cross. Consider your calling that not many of you could be called wise theologians! 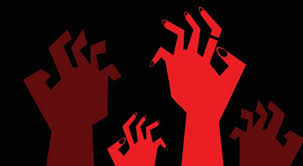 The blood of Jesus is slippery! Such a simple yet profound depiction of a truth that even a child could understand. We indeed can be free of any influence of the demonic by reminding them, and ourselves that Jesus already died to nullify their power. We are free and we can help others be free!